Using Dialogue To Improve Your English 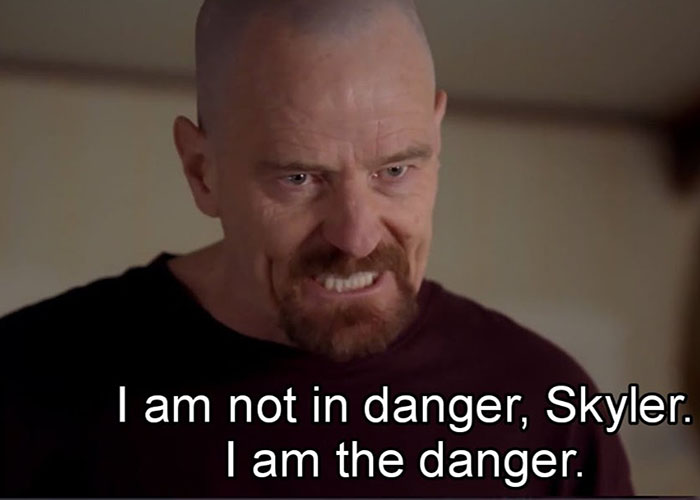 Watching films and series is a great way of picking up new vocabulary and of strengthening your listening skills. In this post we will explore some of the dialogue in the successful Netflix series, Breaking Bad. This is a show that has won countless awards for its writing, and that in part is due to the colourful and dramatic dialogue you can hear in each and every episode.

Watching a series like this, you can learn many new expressions and individual words. What’s more, you can also increase your exposure to the rhythm of English speech. Below is a list of some of the best bits of dialogue, plus a definition for each. Enjoy!
(But first…)

Walter White, a middle-aged high school chemistry teacher, responds to a diagnosis of terminal cancer by turning to a life of crime to provide for his family’s future.

This is almost a precursor to Walter White’s “Say my name” speech in season five. Having nothing but his attitude and staring-contest skills, Walt successfully gets two tough-looking meth wannabes to leave his territory after he catches one of them buying supplies for a cook.

Stay out of my territory = this is my place/area of work – leave it alone or you will suffer the consequences.

In Mike’s best monologue of the series, he explains to Walt why he needs to address Jesse’s plan to kill two drug dealers against Gus’ wishes. He recounts being a cop who attempted to scare an abusive man straight, only to have the scumbag murder his victim two weeks later. “The moral of the story is: I chose a half-measure when I should have gone all the way. I’ll never make that mistake again. No more half-measures, Walter.”

Trivia: Aaron Paul has “no half-measures” tattooed across his bicep.
Half-measures = doing something or having a policy which is not forceful enough.

With these words, Gus sets in motion the ill-fated assassination attempt of Hank. The move marks the beginning of the end for the killer twins, as well as the first sign that he’s ready to cut ties with the cartel, as the attempt goes against the expressed wishes of Juan Bolsa, who dies soon after at the hands of Mexican federales (also a Gus move).

After Jesse asks if he’s going to be an enforcer type, Mike puts young Mr. Pinkman in his place, reminding him that he’s no Victor — the man Gus dispatched with a box cutter.

To be the guy = to be the most important, valued or capable person in a given situation.

The most famous Walt quote has been celebrated by fans and inspired an homage by Samuel L. Jackson. Breaking Bad writer Gennifer Hutchison, who wrote the episode, told THR she didn’t realize the monologue would become iconic. “It was always a cool scene. I didn’t realize how big it would become.” Here’s the quote in full: “You clearly don’t know who you’re talking to, so let me clue you in. I am not in danger, Skyler. I am the danger. A guy opens his door and gets shot, and you think that of me? No! I am the one who knocks!”

I am the one who knocks = the best sentence ever to scare the life out of someone.

This is what happens when you really get on Gus’ bad side. No more Mr. Polite Fast Food Restaurateur. Once Gus is confident Jesse can run his lab without Walt, he tells Heisenberg to stay away from Jesse or his family will die. What he really means: I will kill you as soon as I convince Jesse to let me.

Walter’s God complex manifested itself early in season five. After killing Gus Fring and pulling off the brilliant magnet attack on the police’s evidence room, Mike asks Walt how he can be so sure it all worked. “Because I say so,” is the smug Heisenberg’s answer. Breaking Bad writer George Mastras told THR the line illustrated Walt’s “arrogance” at the start of the season, which the writers would work readily to tear down. “There’s this arrogance about him,” Mastras said. “How long was this going to last?”

Because I say so. = When you want people to just DO WHAT YOU WANT and they ask you why – lower your head, look down at them, don’t smile, and then say: Because I say so. Honestly, they’ll obey you.

What is the takeaway here? It’s about how to use a film, or more specifically a series, to build up your vocabulary. Listening to actual dialogue, while admittedly a challenge, is a doubly beneficial activity. For more tips on how to improve your listening generally, check out our blog post on this topic.

First of all, listening to actual dialogue or authentic material, as the BC calls it, exposes you to not just what people say, but how they say it. Compare this, for example, with the kind of material you find in an English textbook. Typically, such material is spoken at a slower speed to help students understand it, and the vocabulary is fairly simple. It is also much more focussed than a series.

This is not to speak badly about textbook material because, for sure, it is very useful. However, it is a little bit fake in a certain way and the content you get from ‘authentic material’, while more difficult, is also more real, and more interesting.

So, number one, authentic material gives you a better sense of HOW people really speak. This is because the speed, rhythms, intonations and so on are more natural. This will, in the end, prepare you better for real conversations with native speakers.

Second, the vocabulary itself, because it is authentic, will be more varied, richer and more colourful than anything you can find in a textbook. By learning and using these expressions, you will be able to make more natural-sounding sentences and speak more and more like a native.

In summary, using films and series to improve vocabulary and listening is, while more of a challenge, a lot of more rewarding and stimulating and, in the long-run, a lot more useful than many kinds of listening activities.

What has your experience of watching films and series been? Which series and films do you like? Have you learnt any interesting words or phrases? Let us know in the comments section below.

There is also an interesting post from the British Council about using dialogue to improve your English. While this is aimed mainly at teachers, it has interesting ideas for students, too.

If you are interested in taking your English further, why not have a look at our full range of English classes. We offer courses from Beginner to Advanced, business and IELTS preparation.

We use cookies to ensure that we give you the best experience on our website. If you continue to use this site we will assume that you are happy with it.OkPrivacy policy